Hand Position During Front Kick: Up or Down? 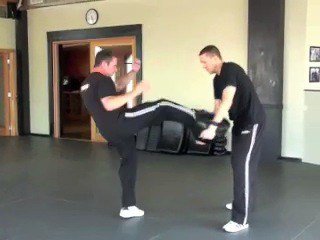 I want to talk about hand position during a front kick. Normally, I am reluctant to get so far into the minutiae of a technique. We are in danger of becoming too “martial arty” and dogmatic if we discuss exact positioning, except in those rare instances where exact positioning means the difference between life and death.

I consider this to be old news and common sense (may of you will, too) but it has come up during my recent travels, so it deserves some attention.

The issue is how, and how much, to keep your hands up while delivering a front kick. The general instruction in Krav Maga is to keep your hands up. However, as students learn to involve their hips and deliver a stronger kick, their bodies naturally want to counterbalance by dropping the hand. There is a clear conflict between the Instruction (“Hands Up!”) and the body mechanics (“Counterbalance by dropping the hand”), How to resolve this?

Some students resolve the situation by stubbornly following instructions and keeping their hands up. This is not as good as it sounds. It often learns to an artificial, unnatural posture that reduces the speed and power of the kick. Look at the following examples on video:

These are all good students with decent kicks. However, they have been told (by me, by the way!) to keep their hands up, and they do it with such determination that it stiffens their upper bodies and reduces their freedom of movement. Ultimately, I think it detracts from the kick. Now, we DON’T want them to suddenly drop their hands. This would leave them exposed during a fight. So what do we do?

We compromise. I advocate a little “elbow pump.” The arm wants to move dynamically, so we let it. But instead of dropping the hand all the way down, we let it “pump” a little bit, which helps to counterbalance, adds power to the strike, but keeps the hand relatively close to the action and able to recover immediately.

Here is some video of some successive front kicks. The hand is lower in some than in others. You can decide for yourself if it’s too low, but a greater hand movement does allow for more dynamic and powerful movement.

Again, at the end of the day we can’t become too dogmatic. The point is to kick the bad guy in the groin so he feels like he’s got a tonsil problem, and do it in a way that is relatively safe for us. The difference of a few inches counts in other areas of life, but not so much here. As long as your hands remain available for the fight, I think you’re OK, and I prefer this more dynamic movement. Let me know what you think!